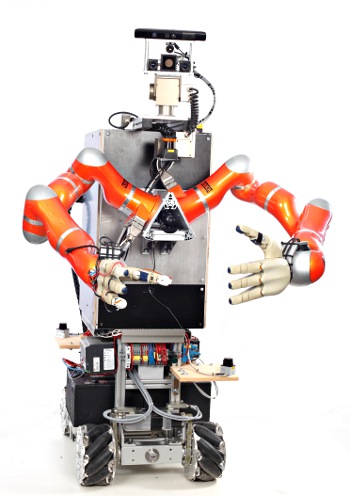 TUM-Rosie has been built around the KUKA-omnidirectional base and KUKA-lightweight LWR-4 arms. Deployed in the Assistive Kitchen environment of the Intelligent Autonomous Systems Group (http://ias.cs.tum.edu) it has been in the operation for over more than a year. The main objective of the research performed on- and around the robot is to develop a system with the very high degree of cognition involved. The latter thus envisions a system that can intelligently perceive environments, reason about them, autonomously infer best plausible actions and in the end, also successfully execute them. Following video demonstrates some of the so far developed capabilities:

Technically the robot consists of the following components:

All the hardware is integrated in the Robot Operating System and (partly) in YARP. The code can be found in the tum-ros-pkg repository (http://tum-ros-pkg.sourceforge.net/). Notable software components are grouped into stacks and include: