From 2007 to 2009, I'd participated the contest named Robot Grand Challenge in KOREA to make robot complete the given missions with a similar performance to 5-6 years old human beings: understanding what the mission girl asks for, looking for the elevator on the first floor with the given map, taking the elevator on and going up, going to the mission room and finding the mission girl whom the robot met on the first floor, and coming back with the mission object to the origin. This is almost “mission impossible” and it needs the latest results from every research areas relating to robotics such as perception, map building and slam, knowledge processing, face/ voice/ object recognition, motion planning and control, grasping, and hardware control. 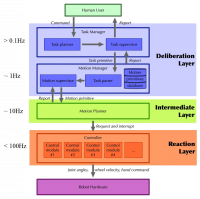 For this, we developed a new multi-layered motion planning and control architecture specialized to mobile manipulators that integrates task planning, task parsing, supervising, motion planning and feedback control. We set up a motion primitives database for typical mobile manipulation tasks so that we can offer a task programming environment which is user-friendly and reusable. The Elastic Roadmap framework (pdf) is implemented within our architecture to enable real-time planning and control of mobile manipulators. Around 5 teams were collaborated for the contest and we got first prize in 2009 with a bunch of trials and errors. See the movie. I also participated the relevant project in 21 frontier program and the latest results for this can be viewed on:

Taking in the elevator,

The traditional view of robot motion planning and control has assigned distinct roles to these two functions. The planner’s role has been to create reference trajectories for the controller, whose role in turn is to employ feedback control laws to successfully track the reference trajectory as closely as possible. The other approach (ER) is to blur the traditional distinction between planning and control so that global motion planning and the hierarchical control framework are integrated into a coherent framework. It has been shown to be very effective in practical settings. We extended this framework to allow for nonholonomic mobile manipulators, and such that it allows for compliance control.

As wheeled mobile manipulators become more compact in size, carry large payloads, and move at higher speeds over more diverse terrain, the possibility of rollover becomes more and more real. Mobile manipulators can use their arms to prevent it.

Cheetah's long strong tail is used for balance, so that it makes the sharp turns and quick switchbacks possible without Cheetah losing any speed.

We derived a real-time dynamic balancing control law for wheeled mobile manipulators. The well-established zero moment point (ZMP) condition is used for the measure of the dynamic stability. robust and real-time balancing is achieved comparing with previous research.

For humans, because of biomechanical redundancy, there are many ways to generate a movement in order to achieve the same goal. For example, even for a simple point-to-point reaching, there are almost infinite number of feasible motions. We call it motor coordination. As a natural consequence, to solve the redundancy problem become one of the critical issues in human-like robot movement generation, but fortunately, we can learn from human about how to solve it.

One more issue on transferring this principle to humanoid robot is that it is difficult to solve the optimal control problem in a fast way for the multi-dimensional dynamics model of humanoid. For this we used the human motion capture data by processing using PCA (principal component analysis) and made the optimal control problem reduce to a parameter optimization so that we can generate human-like movement in a near real-time. 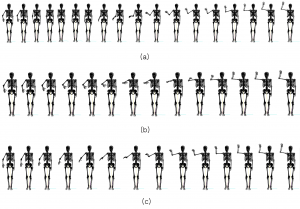 Humans are very good at learning how to multi-task. Our research motivations are that robot also must multi-task. A single on-board computer has to control more that 30 actuators, while processing diverse sensor measurements to perform object recognition, motion planning, and control. So, our goal is to generate, in real-time, trajectories that take into account the cost of control. The basic idea is that the easiest control law to implement is a constant input. The mathematical description is proposed by Brocekt in 1997 and it is called minimum attention control. The snapshots of minimum torque sum, minimum torque change, and minimum attention motions are shown in the right figure.