The Intelligent Autonomous Systems group is preliminary releasing a database of 3D household objects obtained with the following hardware devices: 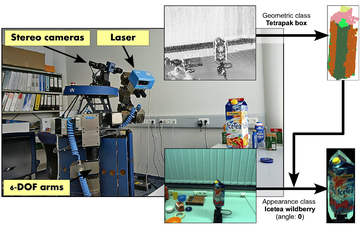 The dataset of objects encompasses the ones commonly used in a typical household environment (mugs, groceries, utensils, books, etc) and is envisioned for a larger expansion in the future. In a pursue to account for a wide variety of view angles, we rotated the objects on the rotating table with a given angle-step (30 degrees in the preliminary version) and acquired partial snapshots from a human-eye perspective, i.e. the ones that the best approximate the robot's view point during its working cycle. The images in the dataset have been acquired using Basler Scout scA1390 stereo cameras at a resolution of 1390×1038 pixels, calibrated using standard calibration techniques from openCV. The 3D depth data was recorded using a SICK LMS400 range scanner with 0.5 degree angular resolution, resulting in point clouds with roughly 200-1000 points per object after the gross statistical removal procedure (PCD-Delimited, PCD-Rotated). The range scanner was tilted with 30 radians/s during one scanning cycle.

The code is available under the following URLs:

Should you have any questions, please contact Dejan Pangercic.